Well, I made the Samoas. They’re okay, but I think they’ll be better when they come of age. Ha Ha Ha. Get it? Margaret Mead? Okay, now I’m back to being very serious.

I kind of screwed these up. The coconut mixture is a little bit too chewy and instead of spreading the coconut mixture over the top, I just left it in a blob in the center. On one hand, it makes the flower shapes look more like flowers. On the other, the texture is kind of weird.

Also, the recipe as stated makes way too much topping so you’ll probably want to halve it. Half of the recipe was enough to cover at least 24 of the little shortbread cookies.

To get the striped tops, I put about 1 1/2 cups of chocolate chips in a freezer and bag and microwaved the whole bag for about 2 minutes, stopping to massage bag and distribute heat ever 30 seconds. Once the chips were melted, I cut a tiny snip off the bottom corner and just squeezed out the chocolate.

Here’s a link to the recipe I followed. 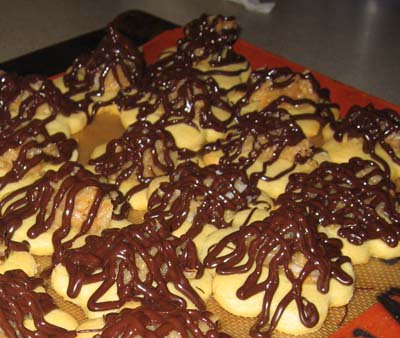