I woke up this morning with a million post-trip chores, but the only thing I accomplished was grocery shopping and baking brownies inspired by telenovelas. While the brownies baked, I worried they wouldn’t be good so I made some dough for a cookie from Food and Wine. Coincidentally, the cookie’s title also sounds like the name of soap opera. 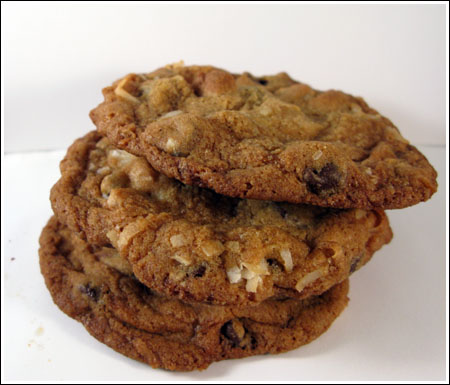 These were supposed to be a back-up to the brownies, but they stole the show!   They’re dark from all the brown sugar and perhaps I over-baked the first few; but they are excellent with lot of ripples and folds and texture contrasts from the nuts and chips. If I’d added the golden raisins, they would have had an even more interesting texture, but I was willing to sacrifice that because I don’t care for golden raisins near chocolate. Don't have the yield.