Next time you visit Chicago, stroll through the lobby of The Palmer House Hilton. It’s one of my favorite places in the city, with so much history. A while back I wrote about my great grandmother having spent some time there, so whenever I’m in the hotel I always think of her. And brownies. The Palmer House Brownies are legend.

Since I first posted this, several copycat Palmer House Brownies recipes have surfaced and you can find them with a quick Google search. I originally found the recipe in Bon Appetit and made my own changes to it. 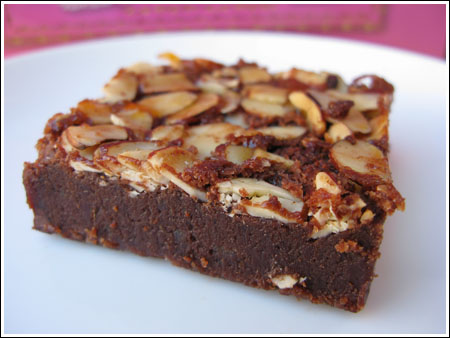 As you can guess from the 9 oz of chocolate and half pound of butter, the brownies are intensely fudgy. My first batch was a little too sweet because I used 9 oz semisweet chocolate instead of bittersweet.  I went back and made the brownies with 7 1/2 oz of 60% cacao chocolate and 1 1/2 oz of unsweetened and they were much better.  If you don’t have that combo, you could also try 9 oz of a 72 %.

Along with the being dense and fudgy, the brownies have kind of a crust on top and bottom. That might be due to beating the eggs with a mixer rather than gingerly whisking them into the batter, but in any case I liked the crust! So I want to give these another try with a less sweet chocolate…..and walnuts. The almonds were pretty, but the walnuts would be more true to the original.

One final note. When I pulled these out of the oven, they looked horrible. The brownies looked gritty, the edges were raised quite a bit and the middle seemed jiggly. I knew they were cooked, though. I’d baked them the full 45 minutes and they smelled done. After the brownies cooled and chilled, the texture was excellent.

UPDATE:  I made these brownies again with better chocolate and called them Old Hotel Brownies. You can check that post and look at the comments with reviews from other readers.  The recipe below is is the same one on that page, but I’m keeping both pages since the other page has the comments from reviewers.
As promised, here is the photo. This was taken after the brownies chilled for several hours.

Stir together cake flour, baking powder and salt; set aside.

Melt butter in a saucepan set over medium heat. Add chocolate. Reduce heat to low and stir until chocolate is melted. Remove from heat and let cool slightly.

Beat eggs and sugar together for about 40 seconds in a mixing bowl using high speed of an electric mixer. Stir or whisk in the melted chocolate and vanilla. Sprinkle the flour mixture over the chocolate batter and gently fold it in. Pour batter into prepared pan. Drop the pan from about 5 inches off the counter to release air bubbles.

Chop the nuts and sprinkle them over the brownies.

Bake brownies for 40-45 minutes or until edges are raised and have begun to pull away from pan.

Microwave apricot preserves for 20 seconds and strain out any chunks (I didn’t strain). Brush as much as you like over nuts. Cool at room temperature for an hour then transfer to refrigerator to chill. Lift from pan and cut into 16 squares.

**Original recipe used 9 oz of bittersweet chocolate and no unsweetened. If you use bittersweet, use 70% or above or the brownies might be too sweet

Note about nuts: I used 1 cup of nuts, but 2 cups of nuts is better for cutting the sweetness of the brownies.