I didn’t have time to bake from scratch this morning, so I took advantage of some boxed mix and made these brownie mix Rocky Road Brownies. I wasn’t expecting them to be that great, but they were delicious. Or maybe I was just craving that instant brownie mix flavor of my youth? If you have some brownie mix on hand, this a good recipe. If you have a little more time, Martha Stewart’s got a similar Rocky Road Brownie from scratch.

Update: It’s been a while since I posted this. Since then I’ve made (at least) dozens of different scratch brownies, but I still like these doctored brownie mix brownies. The not-too-rich brownie mix base is the perfect foil for the gooey topping. 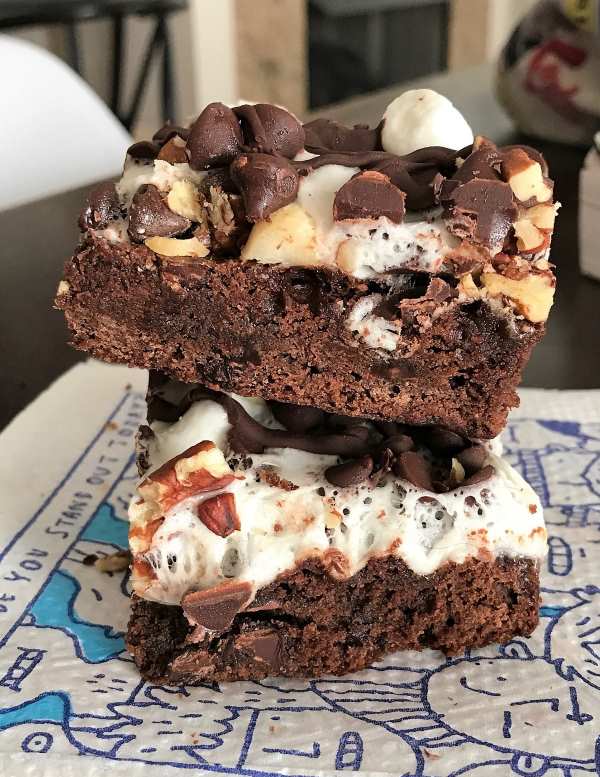 Cookie Madness
Convenient brownie mix based rocky road brownies can be made with any brand of brownie mix. All you do is take the brownies out a little early, cover with marshmallows, chips and nuts, bake for 5 more minutes, then let cool.
Print Recipe Pin Recipe
Prep Time 10 mins
Cook Time 25 mins
Total Time 35 mins
Course Dessert
Cuisine American
Servings 24

**The marshmallows get puffy and melt, but they don’t really brown after 5 minutes. It’s important not to keep the brownies in the oven too long because you don’t want to overcook them. If you really want brown marshmallows you can throw them under the broiler for about a minute after the 5 minutes of oven cooking.
« Sweet Potato Chocolate Chip Bread
Morning Glory Muffins — Jumbo Size »