, and in my opinion it may be their best cookbook yet.  With recipes, tastings and product tests from all five seasons of the Cook’s Country TV show, the book is packed with great recipes, conversational, and easy to follow. The America’s Test Kitchen meticulous attention to detail is still there, and they’ve used full color illustrations and side notes very effectively so that the book flows well and entertains as it instructs. It’s perfect for the experienced cook looking to learn a few new techniques, but would also make a wonderful gift for a teen or someone with a newfound interest in cooking. I’m hoping this becomes a go-to book for Fuzz. For those of you not familiar with them, the America’s Test Kitchen team works out of a 2,300 square foot kitchen located in a farmhouse just outside of Boston. It is the home of Cook’s Illustrated, Cook’s Country, and The Cook’s Country TV show. If you are one of the estimated 1.7 million viewers per week, this book is a quick reference to all the recipes you’ve seen on the show. However, if you’ve never watched a single episode you’ll still love the book because it brings the show to you and takes you behind the scenes. The introduction gives the history of America’s Test Kitchen and tells a little bit about the people behind the show, while the chapters have themes.

…and so on, including chapters titled Our Sunday Best, Tex Mex Favorites, Everybody Loves Italian, The State of Grilling, Rise and Shine Breakfasts and Breads, Great American Cakes and Cookies, Old Fashioned Fruit Desserts and Save Room for Pie.

I thought I’d like the dessert chapters the best, but my favorite parts of the book were the sections covering everyday food and perfected versions of family favorites.   There are also several versions of things I wish I was really good at making, such as fried chicken (the book has three different versions) and cinnamon buns.

This is a book you’ll use if you have 4 cookbooks or 40 million.  It’s a good, all-around cookbook with lots of bonuses including the historical blurbs (sidebars include stories about automats, Dr. James Henry Salisbury and the history of fishsticks) plus other side bars showing the differences between various ingredients and brands.  Speaking of which, recommended brands and products are featured in a table at the end of the book and include full color photos of the labels of recommended products.  I love it when cookbooks do this, especially when they’ve selected a product I’m not familiar with and need to find it at the store. 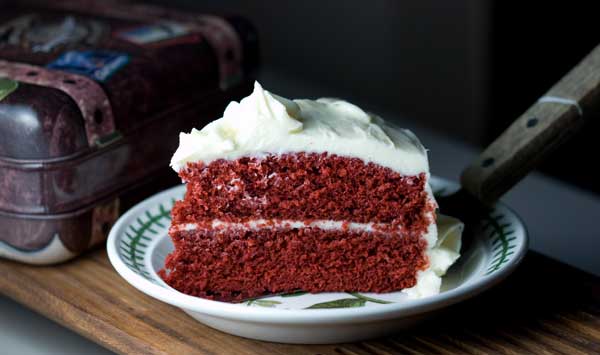 Okay, so the promised recipe!  Since I love red velvet cake, I’m sharing the book’s recipe for it.  I’ve paraphrased a tiny bit (for instance, I noted that I didn’t have parchment), but have kept the recipe pretty much the same to give you an idea of how recipes appear in the book.   I noticed they did clump what appear to be a lot of steps into one numbered bullet point, but that was probably due to spacing issues.

As for the cake, it’s my new favorite red velvet! They nailed the level of tartness that red velvet is supposed to have, the level of chocolate (which a lot of recipes get wrong), and are dead-on with the vibrant red color. The icing recipe is good too. A red velvet cake recipe adapted from The Complete Cook's Country TV Show Cookbook. Make sure to use natural (as opposed to Dutch or dark) cocoa so the cake will have the proper color and rise.
Servings: 12
Author: America's Test Kitchen via Cookie Madness