Today’s recipe is from Extreme Brownies: 50 Recipes for the Most Over-the-Top Treats Ever by Connie Weiss. Weiss, a pastry chef who sells her sweet treats at the Old Beach Farmers’ Market in Virginia Beach, knows a thing or two about brownies and shares recipes that live up to the book’s title. These deeply chocolate peanut butter cup packed brownies which Connie made for The Today Show are a good example. As the book promises, they are extreme. A 9×13 inch pan makes 12 dramatically large or 24 generous size brownies.  And while you could always cut them smaller for meetings or parties, the large size brownies are perfect for bake sales and would look beautiful individually wrapped and labeled. Overall, I was pleased with the recipe and have bookmarked quite a few others including the PMS Brownies, Connie’s Caramel-Stuffed Sea Salt Brownies, Chookie Brownies (Connie’s rendition of a “brookie”) and Tuxedo Brownies, which have a fluffy layer of white filling between the fudge brownie and chocolate icing.  There are also a lot of interesting sounding blondies. 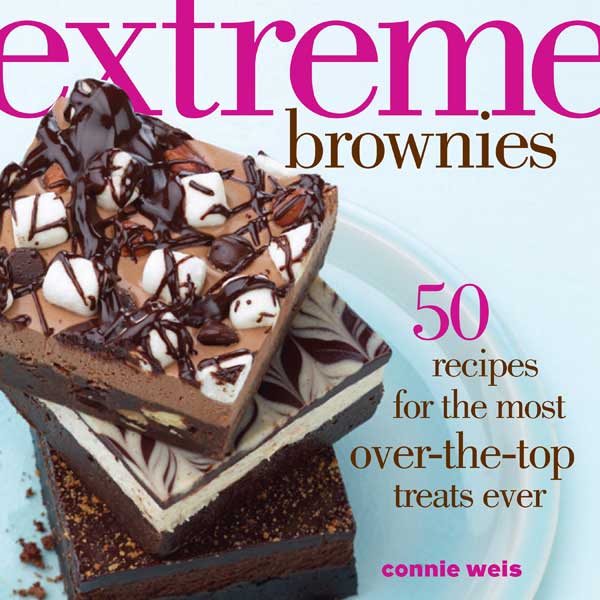 Many thanks to Connie Weiss and Andrews McMeel for sharing the recipe. Cookie Madness
" When I’m in the kitchen, I like to listen to either the TV or radio (preferably NPR) for background fodder as I’m cooking. One day on the Today show, Hoda Kotb held up a package of brownies she’d bought at a grocery store as one of her favorite things that she likes to share with viewers. I made a mental note that my brownies looked a lot better, and one day I would send her some. About six months later I did, and I hoped I would get a reply from Hoda, maybe with an autographed picture. Instead, I had an email from the producer asking me if I would like to come on the show to do a cooking segment. I was thrilled, and in July 2012, some friends and I went to New York and had a blast with my 15 minutes of fame. One of the results of that appearance, however, is that I always have people at my booth asking for the Today show brownie, so as much as I like to change up my selection, this is one I always have to bring." -- Connie Weiss
Print Recipe Pin Recipe
Prep Time 10 mins
Cook Time 35 mins
Total Time 45 mins
Course Dessert
Cuisine American
Servings 24

From Extreme Brownies: 50 Recipes for the Most Over-the-Top Treats Ever by Connie Weis/Andrews McMeel Publishing, 2014.
Tried this recipe?Let us know how it was!