If you’re a grain-free baker or just watching gluten, here’s a terrific recipe for banana bread made with cassava flour. It’s a moist, sweet, banana loaf that is perfect for breakfast and sweet enough for dessert. You can make a full 8 1/2 by 4 1/2 loaf with 3 bananas, or use 1 banana and make a small loaf. My dog HAL and I (and sometimes Emma) are the only ones who eat banana bread, so I made the small loaf. Recipe is for the regular size.

I’ve been trying to nail down some food sensitvities lately and baking with wheat flour alternatives. One minor challenge is that most gluten-free flours are blends, so if a gluten-free baked good causes problems, it could be because of just one ingredient in the blend — maybe the potato starch? Maybe the buckwheat? Not that this has stopped me from using blends, but there’s definitely an advantage to baking with one-ingredient flours like cassava, and I’m having fun baking my way through a bag of it.

So What is Cassava Flour?

Cassava is also known as yuca. It’s a root vegetable grown all over South America and the Caribbean where it’s used in many native dishes. It is not safe to eat raw cassava, so the root is often sliced, boiled, dried and ground into flour. The word cassava is sometimes used interchangeably with tapioca, which also comes from the yuca plant. The difference between tapioca and cassava is that tapioca is a starch extracted from the root of the yuca, while cassava flour is the ground whole root.

I use Otto’s brand cassava flour, which advertises itself as 100% yuca. Otto’s can used as a 1:1 wheat flour substitute in many recipes, though I admit I’ve mostly been using recipes from Otto’s and haven’t experimented much. So far I’ve made biscotti, brownies, this cassava flour banana bread and even a French baguette. Of them all, i think the banana bread was the one that tasted most like a wheat flour baked good. The French bread was definitely not like a traditional baguette (though very tasty) and the brownies were delicious, but had a strong coconut sugar flavor. 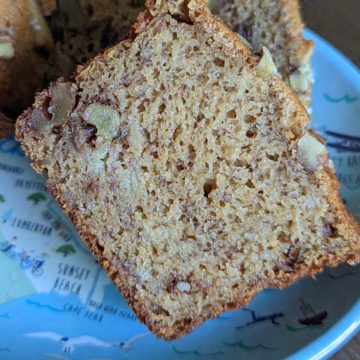