I usually make yeast breads in a stand mixer, but I recently discovered that the kneading attachment on my food processor does a super quick job of getting dough to the “smooth and elastic” phase. These food processor cinnamon rolls were my latest experiment.

I took one of our oldest, favorite, cinnamon roll recipes, halved it, and revamped it for the processor. The rolls baked up light, fluffy and perfect! The icing is a little different from others. It’s made with cream cheese rather than butter and includes a bit of corn syrup and heavy cream so it doesn’t harden as it sits out. You can ice these with whatever type icing you like, but this one was actually very good. It has the consistency of the kind of icing that comes with packaged cinnamon rolls.

But back to the dough. The egg measurements are a little strange since I had to halve an egg, but the extra yolk in the dough (plus everything else) makes it a really nice dough to work with. I coated the dough with a little oil during the first rise, so when I punched it down it was just slick enough that I could skip the floured surface and just press it into a rectangle on my silicone mat.

A Secret Ingredient for Cinnamon Rolls!

One final note.  It’s not easy to find, but if you can score some McCormick Butter & Nut Extract (they now call it Cake Batter Flavor), use a bit of that and a bit of vanilla instead of just vanilla in the dough.  That particular extract has a strong flavor and color so I use it very, very, sparingly, but it adds “a little something” to sweet yeast doughs and some cakes.  I haven’t seen it in Chicago and could never find it in Texas, but you can buy it on Amazon or find it in grocery stores in parts Pennsylvania, Florida and North Carolina.

Update:  I added an alternative icing in case you don’t have cream cheese.  Also, you don’t have to make these in the food processor.  When I came up with the recipe I just happened to have it out. A stand mixer with a dough hook is just fine. 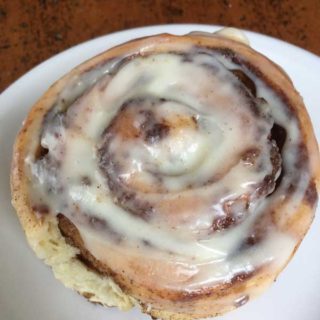 Icing (See notes for a second version without cream cheese)

I make these a lot, but don’t always have cream cheese around. The alternative icing I use is 1 cup (1/4 pound) powdered sugar mixed with 2 tablespoons softened butter, 1-2 tablespoons of milk or as needed and about 1/4 teaspoon of vanilla. Beat it all together and spoon over warm rolls.
Tried this recipe?Let us know how it was!