Seven Egg Yolks Challah was a gift from Michael Solomonov’s book, Zahav, a World of Israeli Cooking. I’m calling it a gift because I just happened to have seven egg yolks in the refrigerator and was dreading having to throw them out. So thanks to Mr. Solomonov for the recipe. This is a great tasting egg bread, plus it solves the problem of what to do with yolks leftover from Angel Food Cake or other dishes that involve a lot of egg whites.

Seven Egg Yolks Challah is a somewhat puffier than usual Challah. The crust is golden brown and tastes so good you’ll want to pull it off and eat it first. You can taste the yolks, but in a good way that’s similar to the flavor of choux pastry (the kind used for eclairs and cream puffs). Just make sure the egg yolks are really fresh. As for the texture, it’s lighter than my other Challah recipes — almost feathery. And I’m not sure if it’s all the yolks that make it so fragrant, but this bread smells fantastic while baking. I really love this recipe even though I’m sensitive to things with a lot of yolks.

Notes on the Challah Recipe

This is actually one of three Challah recipes on Cookie Madness. The other two are Easy Challah (which my daughter makes all the time) and Rich Challah, which has a bit more eggs and oil. So if you don’t have seven egg yolks to use and just want a good Challah recipe, those are options. But overall I’d say I really like this one and am happy to be able to make Angel Food Cake without worrying about what I’ll do with all the yolks. 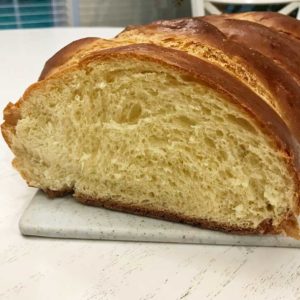 Have another cup of flour on hand because you may need 5 cups rather than 4.
Keyword Challah, Egg Yolks
Tried this recipe?Let us know how it was!